Since the start of 2021, European Union (EU) citizens not already living in the UK have been treated the same way as those from the rest of the world.

means that anyone wants to live and work in the UK has to apply via a points-based system.

Why has immigration to the UK changed?

How are points awarded?

Having a job offer from an approved employer for a skilled job and being able to speak English will give 50 points.

The applicant can achieve the remaining 20 points if they are due to be paid at least £25,600 a year.

They can also gain extra points for having better qualifications (10 points for a relevant PhD, or 20 points for a PhD in science, technology, engineering or maths) or an offer of a job in which the UK has a shortage (20 points), even if it doesn’t pay as much money.

Certain jobs in health or education still merit 20 points even if the salary is less than £25,600. The applicant must be paid at least £20,480, and in line with set amounts for particular jobs in the UK’s four nations.

Below is a table 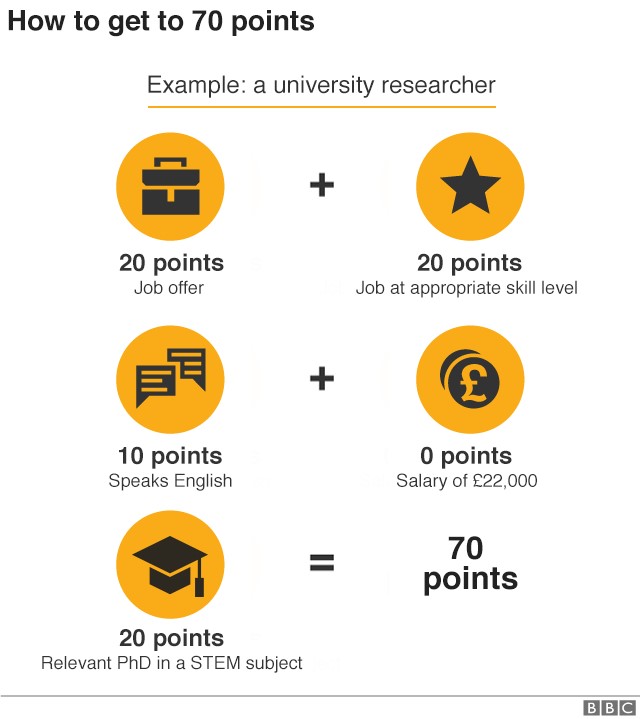 How do you apply to work in the UK?

Applications may be started online, but some people will need to visit a visa application centre in order to prove their identity and show necessary documents.

These might include a certificate of sponsorship from a proposed UK employer, and proof of knowledge of English.

How much will it cost?

The application fee will depend on how many years the job seeker plans to work in the UK, and whether their job is on a list of skills that the UK has shortages of – for instance, vets and web designers.

If their skills are not on that list then the standard fee will be between £610 and £1,408 per person.

Jobseekers will also have to pay a health surcharge of £624 per person per year when they apply – that money is refunded if they don’t get a visa.

And they will need to show that they have the means to support themselves in the UK, which usually involves having a total of at least £1,270 available.

There is a fast-track visa scheme for doctors, nurses and other healthcare professionals.

Those eligible for this visa will pay reduced fees and be supported through the application process.

Successful applicants will be exempt from the immigration health surcharge.

Applicants via this route will still have to meet salary thresholds depending on the type of work they do.

Many care workers will not be covered by the scheme though.

Can people come to the UK to study?

There will be no limit on the number of international students who can come to the UK to study.

The new student visa application system allows them to apply six months before they are due to start a course if they are applying from outside the UK.

The government has also launched a graduate visa to allow students who have completed a degree to stay in the UK for two years. This will rise to three years for those who have done a PhD.

Does everyone need a visa?

Citizens of EU countries who were living in the UK before the end of 2020 can apply for the EU Settlement Scheme.

They had until 30 June 2021 to apply for settled status, although the government has said that it will still accept applications from anyone with a reasonable excuse for a delay.

There are also different schemes for some workers – for example, there is a Global Talent, Innovator and Start-Up visa.

The government says this is designed to attract “those who have an exceptional talent or show exceptional promise in the fields of engineering, science, tech or culture”.

It is also in the process of overhauling the asylum rules.

What You Can Read Next

Would you like to speak to one of our immigration expert over the phone? Just submit your details and weâ€™ll be in touch shortly. You can also email us if you would prefer.